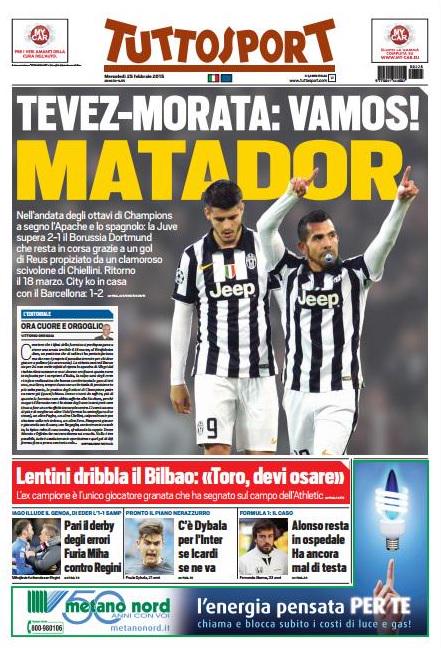 Italian daily Tuttosport have a transfer rumour plastered on their front page on Wednesday concerning a possible striker merry-go-round this summer.

Tuttosport report that Inter Milan striker Mauro Icardi is on the viewfinder of Manchester United.

22-year-old Icardi has scored 14 goals in 23 Serie A matches this campaign, and apparently the Italian forward is sought after by Louis van Gaal.

Tuttosport list that the Red Devils would need to pay north of 40 million euros to land Icardi, and were that deal to materialise then Roberto Mancini would turn his attention to Palermo’s Paulo Dybala.

Dybala, 21, has scored 13 times in 23 matches in the Italian top flight this year.

Taking a step backwards, it’s hard to take the report in Tuttosport too seriously as there is plenty of time between now and the reopening of the transfer window to render this rumour nonsense.

Indeed, the summer transfer window in Serie A reopens on May 1st, 2015.

See a copy of the splash of Tuttosport on Wednesday above, with the Dybala to Inter story at the bottom of the front page.