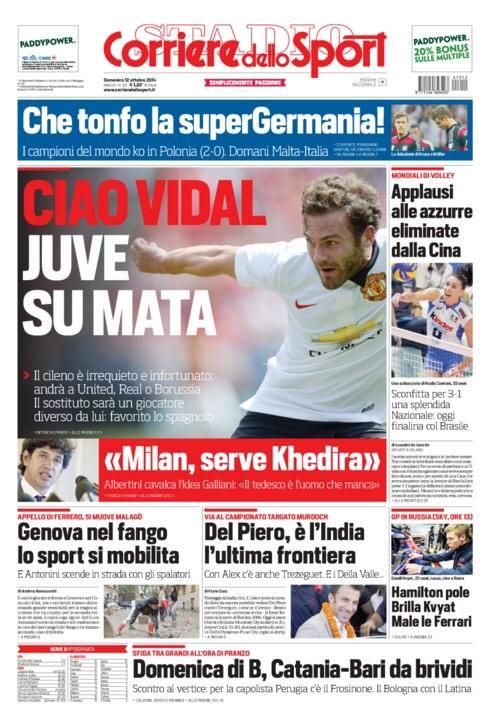 The front page of Italian daily Corrier Dello Sport on Sunday will send shockwaves around Europe as it’s announced in a headline that translates into all languages, “Caio Vidal, Juve su Mata”.

In an incredible twist in the future of Arturo Vidal, the world class Chilean international midfielder, CdS are now convinced that Juventus want to sell Vidal.

The sub-headline on the paper details that “the Chilean is restless and injured, and he will go to [Manchester] United, Real [Madrid] or Borussia [Dortmund]. His replacement will be a different player from him: the favourite is the Spaniard [Juan Mata]”.

For the record, Manchester United have been trailing Vidal for months upon months, however the Red Devils were thwarted in their attempts to sign the player over the summer when fees of around 60 million euros were being discussed for Vidal.

Vidal, who is dogged by knee problems, has recently found himself fall into trouble with the Bianconeri after he was handed record €100,000 fine for 5:30am brawl ahead of Juventus v Roma.

Corriere dello Sport: Juventus could allow Arturo Vidal to leave for as little as €35m in January, funding a move for PSG's Marco Verratti.

EXCLUSIVE OFFER: Back England to beat Estonia at amazing 4/1 odds + Money Back If You Lose !

Click here to Back England at amazing 4/1 odds + Money Back If You Lose!!