The worst possible news has come out on Saturday night regarding Manchester City and Belgium centre-half Vincent Kompany.

Kompany was subbed in the first half of the Sky Blues defeat at Real Madrid in the Champions League last week.

It’s now been reported that Kompany is out of Euro 2016.

That’s a major blow for the Red Devils, who face off against Italy, the Republic of Ireland and Sweden in Group E.

The news of Kompany’s injury was made public by Het Laatste Nieuws journalist Kristof Terreur.

No Euro2016 for Vincent Kompany. #MCFC

With Kompany out of Euro 2016, Chelsea midfielder Eden Hazard is set to be the Belgium captain this summer.

While the news will obviously be a bad blow for Kompany, perhaps it will benefit him in the long run. The centre half has suffered repeated injuries this season, and the best way to extend his career may be for a long pause now, so his body can fully heal for the future.

Kompany has posted the following message on Facebook announcing he’s out of the Euros.

His optimistic tone was superb!

We hope he gets better soon. 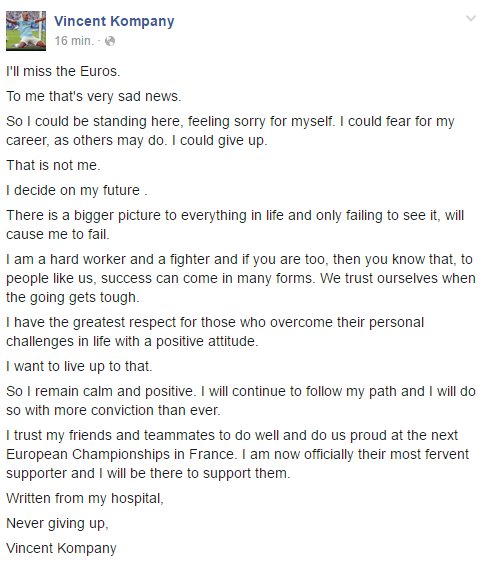