Brighton’s next outing will see them face off with West Brom on Saturday afternoon.

Both sides head into the meeting at the Hawthorns still firmly entrenched in this season’s relegation scrap.

As of writing, Brighton sit 16th in the Premier League, just four points clear of the bottom three.

And though, despite dominating, they did lose their last outing vs Crystal Palace, the Seagulls have actually been in decent form of late.

West Brom, on the other hand, look to be staring a swift return to the Championship in the face.

The Baggies are 19th in the English top-flight, and 11 points adrift of 17th-placed Newcastle.

Sam Allardyce’s side have also won just two league games all season, whilst possessing the worst defensive record in the division.

Ahead of Saturday’s clash, meanwhile, Graham Potter has provided an update on Tariq Lamptey.

The full-back was one of Brighton’s brightest sparks early in the season, notching three assists and one goal in 11 appearances.

However, Lamptey has since missed the club’s last 12 league ties due to injury.

Speaking about the former Chelsea youth this week, though, Potter revealed that he has a chance of being involved on Saturday:

“Yes, he did [train at the weekend]. He started the very first stages of joining the group so depends on how this week goes.

“He has got a chance to maybe be involved [versus West Brom] so we will see.”

Lamptey nearing a return. “Yes, he did [train at the weekend]. He started the very first stages of joining the group so depends on how this week goes,” Graham Potter confirmed. “He has got a chance to maybe be involved [versus West Brom] so we will see.” #BHAFC 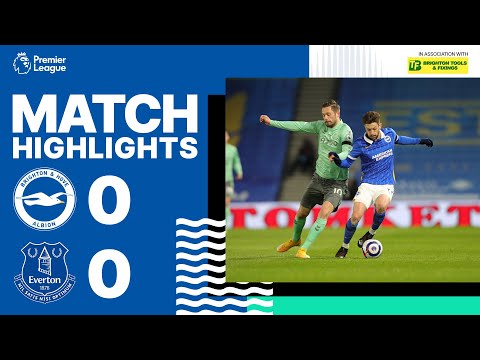 Extended PL Highlights: Brighton & Hove Albion 0 Everton 0
Extended action from the Amex, where Albion were held by a stubborn Toffees side.
2021-04-12T22:27:51Z

Solskjaer provides update on Man United trio, including Marcus Rashford, ahead of Brighton