Quote of the day: “Cristiano Ronaldo is the most important player in this team. He has the best quality. He is always working to do his best every time. When he does we will have a great opportunity this season. As I said he is the most important player of Real and his future will be at Real Madrid. There is no question about this.” – Carlo Ancelotti.

Runner-up: “They can think what they want to think. It doesn’t matter to us. What matters to us is the way that we work. Trust me, we will work very hard. It’s a huge challenge to all of us and it is one we are looking forward to. I hope it will be the same this time [as last season] as I want to win more this time. The club wants to win more. Last year we won the league and that was great but this time we want to win the league and more as well. I don’t let things get in the way,” he said. “I want chances every day, every session, every game. I just see big opportunities. I still have more years left and it’s not like I am saying: ‘Yeah, we won the league so that’s me done’. I want more now. It makes me even more hungry. I was very hungry last year but now I am more hungry. We have a great bunch of players so we can win more and do better. I always try to do better than the day before so, yes, I can do better than last year.” – Robin van Persie.

Suarez set to play for Liverpool

In at the deep end Down Under! Reds to play Suarez for first time since biting Ivanovic (Dominic King, Daily Mail) Luis Suarez is set to pull on a Liverpool shirt for the first time since biting Branislav Ivanovic on April 21 in Melbourne on Wednesday. Having arrived in Australian on Saturday night for the second leg of his club’s pre-season tour, it had been expected Suarez would be eased back into things but Brendan Rodgers has chosen to spring a surprise. Liverpool’s manager is prepared to give the unsettled Uruguay striker some kind of run out against Melbourne Victory at the MCG, before which he hopes to speak to Suarez about his future plans.

Luis Suárez set for crunch talks with Brendan Rodgers over his Liverpool future (Daily Telegraph) Luis Suárez will discuss his Liverpool future with Brendan Rodgers during the next 24 hours after reporting for pre-season training in Melbourne ahead of the club’s arrival in Australia. Suárez, handed an extended summer break by manager Rodgers after representing Uruguay during last month’s Confederations Cup in Brazil, arrived in the city almost 12 hours ahead of his team-mates, who flew in from Jakarta following a 2-0 victory against an Indonesia XI on Saturday. The 26-year-old joins up with the club’s tour of Australia and the Far East after repeatedly stating his determination to leave Anfield since the end of last season, claiming to have lost patience with his treatment at the hands of the English media following a 10-match suspension for biting Chelsea’s Branislav Ivanovic.

Chelsea confident Wayne Rooney will NEVER wear Manchester United shirt again (Martin Lipton, Daily Mirror) Chelsea believe it is a only matter of time before Wayne Rooney is their player. But the Blues are resigned to not landing Rooney in time for him to return to Old Trafford in a Blues shirt on August 26. The Stamford Bridge club will table a second bid of £24million this week and feel they can get their man for around the £30m mark – despite Manchester United’s insistence the England man is not for sale. Jose Mourinho has made Rooney his prime target, with the Chelsea board confident the Scouse ace will not wear a United shirt again. If the Reds are successful in their ongoing quest to land Cesc Fabregas from Barcelona, Chelsea expect United will be able to ‘sell’ his arrival as an ‘upgrade’ to justify the departure of Rooney to SW6. 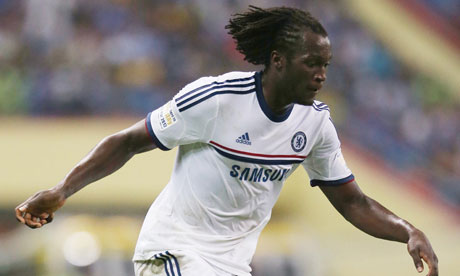 José Mourinho impressed by Romelu Lukaku as Chelsea defeat Malaysian XI (Dom Fifield, Guardian) José Mourinho has been impressed by Romelu Lukaku over the early weeks of his second stint in charge of Chelsea and has suggested he would be happy to start the young Belgium striker in the first team when the Premier League campaign begins next month. Lukaku, who spent last season on loan at West Bromwich Albion, scoring 17 goals, followed up his match-winning penalty in last week’s victory over Singha All Stars in Bangkok with another reward and assist in the 4-1 win over a Malaysian XI on Sunday. The 19-year-old had initially envisaged spending the forthcoming campaign gaining experience via regular football elsewhere in the division but Mourinho has since made it clear he wishes to retain the forward in spite of his on-going pursuit of Manchester United’s Wayne Rooney.

No Ronaldo return to United

He’s Bourne to Ron (Antony Kastrinakis, Sun) Manchester United were last night told they have no chance of signing Cristiano Ronaldo. Real Madrid’s £80million star, who has yet to sign a new deal, fired a stunning double in a 6-0 win at Bournemouth. And new Real boss Carlo Ancelotti warned United: “I don’t think there is a chance that he will leave.

Higuain holding out for Arsenal

Gunners’ Hig-cups at Raf raid (Mark Irwin, Sun) Arsenal target Gonzalo Higuain has asked for 48 hours to think over a £30million move to Napoli. The Real Madrid striker — who has already agreed personal terms with Arsenal — wants to see whether the Gunners will raise their offer before committing himself to a move to Italy. But Arsenal are unwilling to be drawn into a bidding war after believing they had agreed a £23m deal with Madrid. Especially as they know the Spanish giants are planning to use the Higuain money to outbid them for Liverpool hitman Luis Suarez.

Harford to take over from Pardew at Newcastle?

Mick Harford talks leave Alan Pardew’s position at Newcastle United in doubt (Jeremy Wilson, Daily Telegraph) Fresh questions have been raised about manager Alan Pardew’s role at Newcastle United after it emerged that Mick Harford is in talks over a position at the club. Harford is understood to have held discussions over a role working alongside new director of football Joe Kinnear, whom he played under at Wimbledon. Kinnear and Harford are regarded as close allies, with Harford having begun his coaching career at Wimbledon before following Kinnear to Luton and then Nottingham Forest. He later became a manager in his own right at Rotherham, Luton and Queens Park Rangers. Harford’s 13 months as assistant to Karl Robinson at MK Dons came to an end last month, and it was later announced he was to take up a coaching role at Millwall.