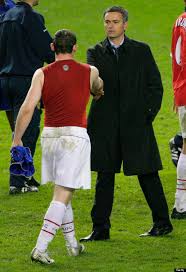 Quote of the day: “If Wayne is second-choice at Man United, then the national team will be affected.” – Jose Mourinho.

Runner-up: “It’s such a big year for me – and it’s a long season as well. In a long season, you will probably have to manage it, be a bit careful, especially with the World Cup at the end of it. But I feel physically good. I’m a bit behind at the moment – I wasn’t able to do much for about six weeks, but then I had a programme to follow and I feel good. I think I will play some part here. I’m a player who wants to play every single game, so it’s hard for me to watch games. It was tough last season, especially at the end when I picked up the other injury and I came back and wasn’t really playing like myself – like I can do. I haven’t had a pre-season for two years and it’s like you’re always playing catch up.” – Jack Wilshere.

Wayne Rooney heading for the exit at Manchester United (Jamie Jackson, Guardian) Wayne Rooney’s Manchester United career appears over after the striker told David Moyes he is “angry and confused” about the manager’s statement that he is now second choice to Robin van Persie. With it being understood that Rooney had long-standing issues with Sir Alex Ferguson, the Scot’s predecessor, and now Moyes over their stance regarding his fallen status, there seems little way back for the striker at United. According to sources close to the player, Rooney is fuming after Moyes stated that “overall my thought on Wayne is, if for any reason we had an injury to Robin van Persie, we’ll need him”, with the 27-year-old also unhappy at statements from Ed Woodward, the executive vice-president. Rooney has entered the final two years of his contract but Woodward said that United would not “be afraid to run a contract down”.

£80million (Martin Blackburn, The Sun) Chelsea will have to cough up £80million to grab Wayne Rooney from Manchester United. The Londoners are on red alert after the Rooney camp last night made it clear their man wants OUT of Old Trafford. Blues boss Jose Mourinho is aware Rooney wants a five-year deal and £200,000 a week to leave the Premier League champs. In addition to that £52m package, Chelsea would have to stump up £28m for his transfer fee. Yesterday the Special One claimed Rooney needs to be assured of regular first-team football — or England’s World Cup hopes in Brazil will nosedive.

Wayne Rooney sees Man United’s negativity as “constructive dismissal” and wants transfer to Chelsea (Martin Lipton, Daily Mirror) Wayne Rooney wants to quit Manchester United after being left “angry and confused” by new Old Trafford boss David Moyes. England ace Rooney feels he is being driven out of the club after five months of negativity which is tantamount to “constructive dismissal”. And Moyes’ suggestion that the Scouse star is effectively no more than an understudy to Robin van Persie was the final straw for Rooney, who believes Chelsea would be his perfect fit. Rooney, now back in Manchester after being sent home from United’s pre-season tour of the Far East and Australia with a hamstring injury, was stunned when he read Moyes’ comments about his status at the club. The 27-year-old contacted United for clarification after Moyes said he was needed by the club “if, for any reason, we have an injury to Robin”. Moyes’ comments were seen as a calculated insult by a player who feels he is at the peak of his career and who has no intention of allowing his football to go backwards. Rooney, fourth on United’s all-time scoring list with 197 goals in 402 appearances since his £25.6million move from Everton in 2004, is understood to be furious at the idea that he is now little more than a squad player. 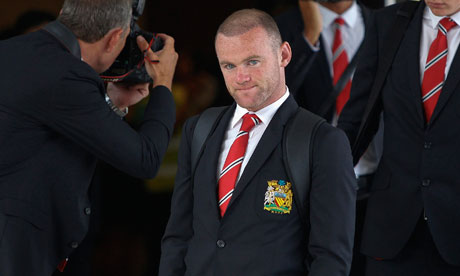 Heading for a divorce: Rooney and Reds are no longer United after breakdown in key relationships (Chris Wheeler, Daily Mail) So how did it come to this? How did the relationship between one of the most gifted players of his generation and the most decorated club in English football turn so sour? It can be traced back to two-and-a-half years ago when Wayne Rooney first expressed a desire to leave Manchester United, questioning the club’s ambition. Back then it ended with a dramatic U-turn and a new £250,000-a-week contract. It is hard to see a similar thing happening now. Some United fans never forgave Rooney. Sir Alex Ferguson never forgot how he felt a gun was held to his head by their most influential player.

End of the Rood for Wayne (Martin Blackburn, Sun) THIS time it really does look like the end for Wayne Rooney at Manchester United. The England ace is currently receiving treatment on his hamstring injury at Carrington — 10,500 miles away from his boss and team-mates in Sydney. And after the developments of the last few days, the distance between the two parties looks every bit that wide. Of course, this is not the first time Rooney has been close to the Old Trafford exit — as he first asked to leave back in October 2010. Back then a shaken Alex Ferguson told a stunned Press conference of his shock and disappointment that his star striker wanted out. Yet just three days later they had kissed and made up — and a new five-year deal worth around £250,000 a week had been agreed.

United still think they can get Fabregas

Manchester United still confident of signing Cesc Fabregas from Barcelona (Mark Ogden, Daily Telegraph) Manchester United believe the financial burden of sanctioning the £51.3 million purchase of Neymar and Lionel Messi’s renegotiated £17 million-a-year contract could force Barcelona to strike a deal for the sale of Cesc Fabregas. Despite claims by Barcelona coach Tito Vilanova that Fabregas “wants to stay here” in the wake of United’s £26 million bid for the former Arsenal captain, the Premier League champions remain confident in their prospects of signing the player before the transfer deadline next month. Having been identified by manager David Moyes as the priority target in attempts to reinforce the club’s midfield, United are prepared for a protracted battle in order to lure Fabregas back to England.

Luis Suarez is off if someone stumps up 40 million pounds

Suarez agent tells clubs to bid £40m to land Uruguayan striker (Dominic King, Daily Mail) Luis Suarez’s agent wants any clubs interested in the unsettled striker to make a £40million bid to test a clause in his contract. Liverpool maintain they only have to listen to offers for Suarez at £40m; the feeling is that it would take a fee of around £50m to buy the Uruguayan. But Suarez’s agent, Pere Guardiola, the brother of Bayern manager Pep, will argue that £40m would trigger a release clause.

Stevan Jovetic: a winning combination of focused professional and big kid (Jonathan Wilson, Guardian) The first time I saw Stevan Jovetic was in the austere beigeness of the Hotel Podgorica. It was the day before Montenegro’s first international as an independent country and there was an air of great ceremony about each stage of the process. This was the first pre-match press conference. Men in suits fussed about, the little flags on the press-conference desk were crisp and even the majority of journalists had put on collared shirts. Then, to the side of the stage Jovetic emerged, his Brian May mop lank with sweat, his red and yellow training kit marked with mud and grass stains. Grinning broadly, clearly bored of waiting, he started flicking a ball from foot to foot. That was six years ago and Jovetic was only 17. The mass of curls has been trimmed now, but Jovetic retains something of that boyishness, the love of simply playing. The evident joy he still takes from football, though, should not disguise either the seriousness with which he takes the game or his ambition. He had signalled his intention to leave Fiorentina long before the end of last season and when a move to Juventus – probably his preferred destination given his love of Italian football – was closed off by their signings of Fernando Llorente and Carlos Tevez, he looked to England.