Quote of the day: “It is important for the team and the Brazilian fans that at the moment all my focus is on winning the Confederations Cup – but after the tournament is finished I hope it is a deal that can get finalised quickly. To play in England for a great team like Tottenham is a dream. What I respect about Tottenham is the ambition they have shown. This summer there has been interest in their coach and their best player – and they have been clear they both are not going anywhere.  When my agent made me aware that Tottenham were interested I knew it would not be a move that I could turn down.” – Paulinho.

Runner-up: “England is in a bad state. You are not going to win the World Cup for 20 or 30 years. You have the best league in the world but it is because you have players from all over the world. There are no home-grown players and there is little chance of them coming through. You need a revolution. Like the French did before they won the World Cup and European Championships — and like Spain today. It is because what they are teaching the young is not right. It is a big emphasis on winning, being tough, jumping, being an athlete, strong, fit and quick. But it should not be like that. The number one thing is England should be striving to have 11 masters of the ball. 11 Iniestas, 11 Xavis. When you have these kind of players you can do whatever you want. Of course you won’t have 11 Xavis I am exaggerating but you could end up with one, two or three. There are certain players right now, I won’t name names, in the national team of England, the control they have of the ball is quite poor. It is quite embarrassing, really. And they are playing for England.” – Ossie Ardiles. Manchester United’s Leighton Baines chase puts Everton on collision course with former manager Moyes (David Anderson, Daily Mirror) David Moyes will have to battle his old club to land Leighton Baines after Everton rejected his £12million offer for the England defender. Everton have been bracing themselves all summer for an approach from their former boss to take Baines with him to Manchester United, and they immediately rebuffed his opening salvo when it finally came on Thursday. The Toffees feel Moyes’ bid hugely undervalues Baines, who was acclaimed as the Premier League’s best left-back last season. Although Everton maintain Baines is not for sale because he is such a key figure in their team, it is understood they may do business if Moyes offers around £20m. That stance will put Moyes on collision course with his former employers as it is believed he does not want to pay more than £15m to bring the ex-Wigan star to the Old Trafford giants.

United raise the stakes in Baines battle with Moyes to offer up to £20m to seal reunion (Simon Jones & John Edwards, Daily Mail)Manchester United will make a renewed bid of £15million plus add-ons for Everton defender Leighton Baines. After rejecting an opening bid in the region of £12m from United, Everton insist the England left-back is not for sale. But United hope to persuade them with a deal that will total £20million including additional performance-related payments for the 28-year-old.

Manchester United are poised to launch new bid to sign Everton’s Leighton Baines after rejection (Jeremy Wilson, Daily Telegraph) Manchester United are expected to return imminently with a second bid for Everton left-back Leighton Baines after David Moyes had a £12 million offer rejected by his former club. Moyes has already overseen major changes to the Old Trafford coaching staff and is now turning his full attention to the squad ahead of his official start as Manchester United manager on Monday. Baines thrived under the guidance of Moyes during their six years together at Everton and it was widely expected that he would attempt to take the 28-year-old to United. Everton, though, reacted strongly to United’s interest and were adamant on Thursday night that they would not sell Baines for any price. They also regard £12 million as well below market value for a player who is in his prime and challenging Ashley Cole to be England’s first‑choice left-back at the World Cup next year.

Not Ruddy Likely (Charlie Wyett, Sun) Jose Mourinho last night made a £5million bid to nab Norwich keeper John Ruddy. But the Chelsea chief must double that to stand a chance of capturing him. Mourinho’s offer for the England ace was immediately turned down. Norwich do not want to sell one of their star players — yet the Special One knows Petr Cech is his only senior keeper at Chelsea. Ruddy, 26, has been an excellent performer for Norwich since he signed from Everton for £400,000 three years ago.

Swansea close in on Bony

Swansea hope to land Wilfried Bony from Vitesse despite Chelsea interest (Stuart James, Guardian) Swansea City are hopeful they will complete the signing of Wilfried Bony from Vitesse Arnhem, despite the Dutch club’s denial that a deal has been agreed for the Ivory Coast striker and strong interest from a number of other Premier League sides, including Chelsea. Bony, who scored 31 goals in 30 appearances for Vitesse in the Eredivisie last season, has spoken of his excitement at the prospect of joining Swansea in a £10.2m deal, which would smash the Welsh club’s transfer record, previously set at £5.55m, when they signed Pablo Hernández last summer. Swansea, however, are mindful that other targets have slipped through their fingers in the past few weeks and are refusing to take anything for granted. 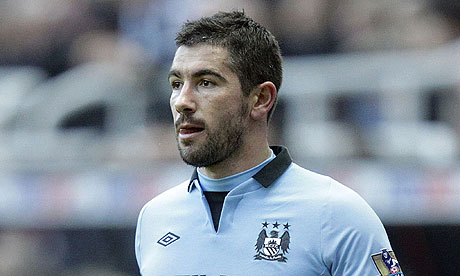 Manchester City’s Aleksandar Kolarov may follow Tevez to Juventus (Louise Taylor, Guardian) Aleksandar Kolarov has dropped a heavy hint that he would be happy to follow Carlos Tevez in taking a pay cut and swapping Manchester City for Juventus. As the Argentina striker completed his transfer to Turin for around £10m before add-ons, the Serbia left-back revealed his frustration at frequently finding himself deputising for Gaël Clichy at the Etihad Stadium. “I am happy at City but I want to play regularly, as I said to Roberto Mancini,” said Kolarov, who does not appear to have been swayed by Manuel Pellegrini replacing Mancini as manager. “I’m in contact with my agent and soon we will understand what will happen. Money is not everything in life and I have no problem in revising my salary. Simply I want a place in the starting line-up.”

Sunderland in talks with Gino Peruzzi over a transfer from Argentina’s Velez Sarsfield (Ed Malyon, Daily Mirror) Sunderland are close to sealing a stunning coup by signing Argentina right-back Gino Peruzzi. The 21-year-old shot to prominence with club Velez Sarsfield after he kept Brazilian superstar Neymar quiet over both legs of a Copa Libertadores semi-final – the South American equivalent of the Champions League. His performances for the 2012 Argentine champions drew praise from across the continent. Now, despite being watched by Europe’s top clubs, it appears the rebuilding Black Cats may be on the brink of securing the starlet’s signature.