Quote of the day: “There’s no budget here, you go get who you want to get, just go and do it’. We are looking at the best players. I do think it’s important that we show people we are carrying on the traditions and trying to take the club forward. I will not name anybody but certainly we are always looking at the best players. I think we are trying to strengthen in a couple of areas. We are short in midfield. We are also a club which tends to invest in the youth side, so you can expect us to go for players in that age group. We are working hard to make sure the first signing is the right one. I have been left a really good team and I want to add to it sensibly.” – David Moyes.

Runner-up: “We must be well prepared both mentally and physically to do it straight from the off. It’s very hard to be consistent and that’s the main reason for Manchester City and Manchester United being successful in the last two years. They have shown for the whole season that they are consistent and that will be our main focus for the next season to show that as well. We haven’t sold any players yet so we are coming from a good base. We’re at a good level and no one is leaving. Maybe someone will come and strengthen our squad, so it’s a better position to be in than last summer when we lost two important players [in Robin van Persie and Alex Song]. I would say consistency is the most important thing. If we can do that, then we should be challenging for trophies and titles.” – Per Mertesacker.

United have no plans for new Rooney contract with Chelsea and PSG eyeing bids (Joe Bernstein, Mail on sunday) Manchester United have no plans to sit down with Wayne Rooney over a new contract and want to assess the striker’s form and fitness before discussing his future. Chief executive Ed Woodward confirmed on the opening leg of their club’s pre-season tour in Thailand that priority is being given to transfers rather than negotiating with Rooney. He still has two years left on his reported £250,000-a-week deal.

Manchester United to keep unsettled striker Wayne Rooney waiting over new contract talks (Jason Burt, Sunday Telegraph)  It is accepted that Rooney is unsettled at United, after a difficult campaign last season in which his relationship with Sir Alex Ferguson deteriorated, with Chelsea increasingly keen to make a bid. Moyes reiterated that he would not sell the striker, but added that he was also determined that neither would speculation over Rooney’s future, and his form, overshadow United and, crucially, he was prepared to wait to see whether the player’s form improved. “Manchester United isn’t about Wayne Rooney,” Moyes said. “Manchester United is about the team, the club. We are talking about him now and rightly so but I won’t allow Wayne Rooney to become more important than the football club and the football team because that’s the heart of it.” Moyes’s pragmatic approach was also stressed by United’s new chief executive Ed Woodward, who said that although Rooney had just two years left on his contract he is “not currently sitting down with any player on an extension”.

Singha All Star XI 1-0 Manchester United: four pointers (Jamie Jackson, Observer) By the close of this defeat to the Singha All-Star XI in Bangkok the absentee list had risen to double figures as Alexander Büttner limped off to make it 10 of David Moyes’s first-team squad who are either crocked or still away resting following international commitments. While the left-back has a tight hamstring and might recover soon, the manager could do without any more headaches in this department.

City in Stevan heaven (Shaun Custis, Sunday Sun) Stevan Jovetic is on the verge of a £27million Manchester City move. Only personal terms have to be finalised — with the striker, 23, eyeing a five-year £120,000-a-week Etihad deal. SunSport revealed last Tuesday how City boss Manuel Pellegrini wanted the Fiorentina ace to replace Carlos Tevez. A source close to the Montenegro star said: “It’s pretty much sorted he’ll go to City. “They just have to sort his contract. It shouldn’t be a big problem.”

Manchester City striker Edin Dzeko will not leave Etihad, says manager Manuel Pellegrini (Jason Burt, Sunday Telegraph) Pellegrini, however, has already reassured the £27 million signing that he will play more next season for City as he nevertheless seeks to recruit at least one more striker. “I spoke two weeks ago with Dzeko when he was on holiday and he does not have any problems,” Pellegrini said. “He will stay here. For me, he’s a very important player. I’m sure that he will give this year the performances to show what he can do.”

Chelsea close in on De Rossi

De Rossi not included in Roma’s summer training camp squad… as Chelsea set sights on £11m man (Rik Sharma, Mail on Sunday) Chelsea target Daniele De Rossi has not been included in the squad for Roma’s summer training camp in Riscone. The combative midfielder played for Italy at the Confederations Cup and is set for an extended break after the tournament. De Rossi, 29, is likely to cost the Blues around £11million to procure and he would take Oriol Romeu’s place in the squad. 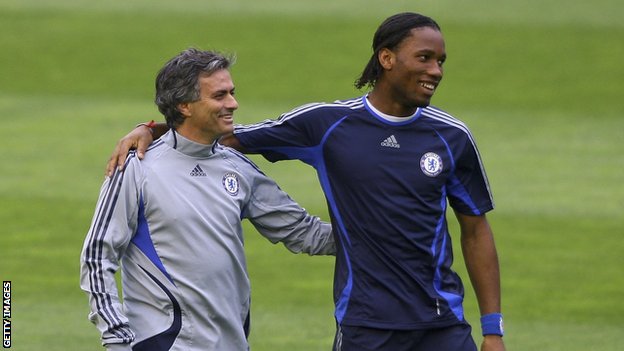 Jose Mourinho wants Didier Drogba to return to Chelsea after striker visits training ground (Matt Law, Sunday Mirror) Jose Mourinho wants Didier Drogba to make a sensational return to Chelsea. Sunday Mirror Sport can reveal Drogba visited Chelsea’s Cobham training ground last Monday and spoke to Mourinho, although the nature of the discussion was private. It is understood boss Mourinho is keen on signing 35-year-old Drogba for this season, but Chelsea would have to approach his current club Galatasaray. If the Turkish giants will not let him go or Drogba wants to see out the final year of his contract then Mourinho will offer him a role at Chelsea in 12 months. Whether this summer or next, it seems only a matter of time until Drogba returns to Chelsea.

Liverpool target Christian Eriksen, Toby Alderweireld AND Ryan Bertrand to create top-four squad (Matt Law, Sunday Mirror) Liverpool want to clinch a £22million double deal for Ajax stars Christian Eriksen and Toby Alderweireld while Chelsea’s Ryan Bertrand is also on their radar. Attacking midfielder Eriksen, 21 and Belgium international defender Alderweireld, 24, both only have one year remaining on their Ajax contracts and are expected to leave the Dutch club. Manager Brendan Rodgers has turned to £15m-rated Eriksen after missing out on Henrikh Mkhitaryan, who snubbed Liverpool to join Borussia Dortmund. Dortmund had also been chasing Eriksen, but Liverpool now only expect to face competition from Roma.

Papiss Cisse training on his own

Newcastle force Papiss Cisse to train on his own following Wonga shirt sponsorship dispute (John Cross, Sunday Mirror) Papiss Cisse is being forced to train on his own after Newcastle got tough over his Wonga shirt ­sponsorship row. Senegalese striker Cisse reported yesterday to train with his ­team-mates – but was sent to the gym to train on his own because of the ­dispute. Cisse, a Muslim, has objected on religious grounds to ­wearing the logo of the pay day loans company on both training and playing strips. The striker has offered to wear a charity-branded shirt rather than the logo of the club’s new sponsors.