Quote of the day: “Money has never won anything. You can spend as much as you want but you must build a team first. Yes, City have huge competition for every place. They have a new manager, new expectations and new motivations. And if they build a team they will be a tough opponent and rival for us in the Champions League and for the Premier League title. But so will Manchester United. So will Arsenal, Tottenham and Liverpool… At Chelsea, we know it’s going to be a tough season but we’re here as well and working hard to be ready for the challenge. We’ll try our best to win the league. Our aim is to do the very best we can.” – Petr Cech.

Moyes £30m Cesc bid gives Barca something to think about as they hunt for Vilanova replacement (Joe Bernstein, Mail) Manchester United tested Barcelona’s resolve to hang on to midfielder Cesc Fabregas with a second bid of £30million, just hours after David Moyes enjoyed a first victory as the club’s new manager. But the Premier League champions still face a frustrating delay over their top target, with Barcelona currently waiting to appoint a new manager after the resignation, due to ill health, of coach Tito Vilanova.

Under Siege (Rob Beasley, Sun) David Moyes is a man under siege as the battle around Wayne Rooney, Cesc Fabregas and Cristiano Ronaldo hots up. The Manchester United boss is in the middle of a Chelsea, Barcelona and Real Madrid nightmare. Chelsea will up their bid for Wayne Rooney to £24million, as Moyes’ £30m bid for Barcelona’s Cesc Fabregas hit a brick wall.

Look away now Arsenal fans (Harry Redknapp, Sun) It was just a couple of years ago Cesc Fabregas told Arsenal boss Arsene Wenger that he wanted to go ‘home’ to Barcelona. Now Manchester United want to bring him back to England. How would that make you feel as an Arsenal supporter? What a sight it would make for Gunners fans to see Fabregas and Robin van Persie lining up for Manchester United against Arsenal next season.

Bleak and ruthless reality of life beyond Wayne Rooney’s world (Michael Calvin, Independent) Wayne’s world might leave him “angry and confused” but the real world is bleaker than Rooney, or his retinue, can imagine. Professional football in a recession is a forbidding place, where the concept of financial fair play has an entirely different connotation to that envisaged by administrators seeking sanity in the market place… Stars like Rooney, mini corporations with coherent commercial strategies which require constant recycling of the principal product, cannot lose. Their contracts are comfort blankets, which can be discarded well before they lose their warmth.

Chelsea reject Liverpool interest in full-back Ryan Bertrand (Dominic Fifield, Observer) Chelsea have knocked back an inquiry from Liverpool over the potential availability of Ryan Bertrand, with the 23-year-old left-back seeking to take what opportunities he can with the Europa League winners… The full-back is contracted until 2016 and, having featured in 38 of the Londoners’ 69 games last term, will have a significant role to play again with Cole’s ankle condition – the joints tend to swell up after matches, requiring rest and recovery time – and the lack of alternative options. 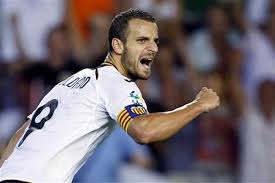 Spurs ready to make club record £18m bid for Valencia striker Soldado (Joe Bernstein, Mail) Tottenham’s normally cautious chairman Daniel Levy is prepared to sanction an £18million move for Valencia striker Roberto Soldado that would break the club’s record transfer fee… Valencia sporting director Braulio Vazquez has confirmed there has been interest from clubs in his centre-forward but denied any bids had been made so far.

Manuel Pellegrini still splashing cash with £22m Pepe bid lined up (Paul Hetherington, Star) Manchester City  are ready to take their summer spending to £114million with a £22m swoop for Real Madrid centre-back Pepe. The Portugal defender is available at £30m but City will not pay that for the defender, 30.

Top clubs in for Papiss Cisse as Newcastle turn to Bafetimbi Gomis as replacement (John Cross, People) Papiss Cisse is set to move to Russia after branding the club’s Wonga shirt sponsorship was ‘immoral’. Russian club Rubin Kazan are ­leading the chase for the Newcastle striker, who refused to go on the club’s pre-season tour to Portugal. And Cisse’s imminent departure has prompted Toon boss Alan Pardew to launched a £15million-plus raid for French strikers Bafetimbi Gomis and Andre-Pierre Gignac.