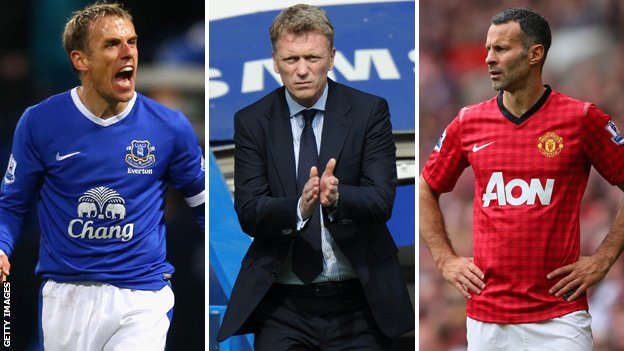 Quote of the day: “I couldn’t do it without the help of Ryan Giggs. Phil Neville had known a little bit at both clubs. But more importantly he probably knew how I worked at Everton more than Manchester United. Phil and Ryan are young, it’s really important in this job that you also keep young, open-minded thoughts because you don’t want to get too old in your ways… It has to be a new era. Whatever we say, my job now is to make my history. I’m going to be following someone who has made incredible history. I think about Matt Busby’s history and then Alex Ferguson’s history – they could do a film about it. I have to make sure now that my history and my time is something which the fans and people in the future talk about.” – David Moyes.

Runner-up: “United are wasting their time. It took a long time for Cesc to get his dream move back home and he won’t give it up. This is home, it is where his family is, and he is playing with his closest friends. He has told us he is happy and that he intends to stay with Barcelona.” – Gerard Pique.

Who Is Barcelona Boss Gerardo Martino?

Barcelona coach Gerardo Martino’s ideology shaped by Old Boys’ network (Jonathan Wilson, Guardian) He took a Newell’s side that had finished 18th and sixth in the previous season’s Apertura and Clausura and shaped them into a purposeful, attractive team. Perhaps they did not score as many goals as some would have liked but they pressed hard, defended well and passed neatly… There is no chance of him making Barcelona a negative side but they are likely to be more cautious than they perhaps have been of late; certainly it is hard to imagine a Martino side capitulating quite so meekly as Barça did to Bayern last season – and throwing away a 2-0 first-leg lead against Atlético Mineiro is only likely to make him more conservative.

Chelsea are ready to pay £30m for Rooney as Mourinho looks to force United’s hand (Neil Ashton, Mail) Chelsea are ready to make a second bid to sign Wayne Rooney. Stamford Bridge manager Jose Mourinho remains determined to make the Manchester United striker his main summer signing and is prepared to pay up to £30million to secure the deal… Chelsea are happy to match Rooney’s bumper £240,000-a-week salary at United and they will also hand him a five-year contract — if he can force his way out of the Barclays Premier League champions.

Wayne Rooney’s secret golf date near to Chelsea HQ (Duncan Wright, Star) Despite his fitness concerns, Rooney travelled down to the London area over the weekend and played at the member’s only Queenwood Golf Club in Surrey, where a host of Cheslea stars play… News that Rooney was so close to Chelsea’s Cobham base will be interesting to Old Trafford officials, with United insisting they do not want to sell their £240,000-a-week striker.

Romelu Lukaku makes strong case for leading the line at Chelsea (Sam Wallace, Independent) Mourinho may have to explain to Lukaku where he will fit into his plans should Rooney arrive.  Rooney would not accept a move if he thought it was to play second fiddle to a 20-year-old in his first proper season at the club. It will be the Englishman who starts big games – Mourinho’s man to play, as he says, in the “compact areas” – and Lukaku who can break down the teams who leave space in behind.

Brendan Rodgers hints at moves for Roberto Soldado, Christian Atsu and Burak Yilmaz (Jack Wilson, Star) The Reds are battling Spurs to sign Spain and Valencia star Roberto Soldado, who is valued at around £20m. Porto frontman Christian Atsu had attracted Rodgers’ interest and he has refused to sign a new deal at the Portuguese champions. And there’s also a possibility of bringing in Galatasaray hitman Burak Yilmaz.

£35m won’t get you Cesc (Neil Custis, Sun) Manchester United have been told not to waste their time by making a THIRD bid for Cesc Fabregas. The Premier League champions are considering a £35million swoop for the Spanish midfielder after Barcelona rejected their improved offer of £31m.

The A-League missed a trick with Manchester United (Joe Gorman, Guardian) The A-League is doing pretty well, thanks in no small part to some high risk ventures from several clubs and the FFA. Not that we got much of that on Saturday night, however. In fact, the A-League All Stars weren’t particularly representative of the national competition that fans have come to know and love.

Villa pull off major coup by convincing Benteke to sign bumper contract… without release clause (Neil Moxley, Mail) Benteke secured a whopping pay rise, lifting his wages beyond the £2.5m-a-year mark as he became the eighth player to earn himself a new deal. Now it seems Villa have negotiated a contract that does not include any release clause.