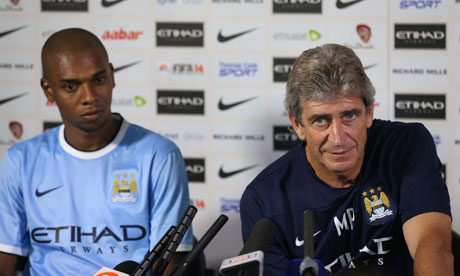 Quote of the day: “We will try to work and do our best and then we will see how many trophies. One of the important [factors why] I am here is the way my other teams always played. I think fans of Manchester City will see a different way to how they played in the other years. I am sure we are going to play an attractive game. We will always try to play in the opposition’s [half], try to be an attacking team, do what all the other teams I worked with before did. I have played against Manchester United twice in the Champions League with Villarreal, in both years we passed to the last 16 and Manchester United didn’t so I have experience playing against United. I know that the most important thing for all the fans is to beat United and if I am here it is because I am sure we will do it This year, same as other years, Manchester City will be top of Manchester United – we will try, at least. For me it is exactly the same. We don’t have a priority for one competition. We know we have to improve what Man City have done in the CL. But also the Premier League is important.” – Manuel Pellegrini.

Runner-up: “Of course, if he [Luis Suarez] stays he can have more chances to win trophies,” he said of Suarez at his unveiling at Liverpool’s Melwood HQ. This club is definitely prepared – the organisation, the mentality of the players and the staff. It’s amazing. It’s a top professional club. Luis is a great player, a fantastic player. He is a massive player for Liverpool. But it’s up to the club to decide what is best for this football club. I had different offers, but when I got the phone call from Liverpool, I was like, ‘Wow!” said the Ivory Coast centre-half. I made my decision straight away. Liverpool are not in the top four, but they have the history and the quality. They have the players, and the winning mentality as well. This club is a winning club. I want to be part of the story here and that’s why I came.” – Kolo Toure.

Arsenal prepare to use first-option clause to bring £25m Fabregas back to London (Sami Mokbel, Daily Mail) Arsenal are manoeuvring themselves into a position to bring Cesc Fabregas back to north London this summer. The former Gunners skipper is currently on his summer holidays following Spain’s Confederations Cup campaign and is pondering his future after a frustrating season at Barcelona.
Publicly, the Spaniard maintains he wants to stay at the Nou Camp, but doubts over how he fits into manager Tito Vilanova’s plans after being regularly overlooked for big games last season has left Fabregas in two minds.

City close in on Jovetic

Manchester City close to sealing transfer of Stevan Jovetic.. and putting one over Manchester United (Martin Lipton, Daily Mirror) Manchester City are poised to see off a late raid by neighbours Manchester United and complete the £28million capture of Fiorentina forward Stevan Jovetic. New boss Manuel Pellegrini has pushed hard to land the 23-year-old Montenegro international, who had also been targeted by Arsenal, Chelsea and Juventus, for his new-look Blues. But while the new Old Trafford chief David Moyes made a last-minute attempt to try to prise Jovetic out of City’s arms, Pellegrini is on the brink of winning his first Manchester battle. Jovetic’s agent, Fali Ramadani, held intensive talks with City sporting director Txiki Begiristain on Wednesday after the Florence club gave the green light.

Mohamed Fayed close to selling Fulham to American billionaire who is ready to offer up to £200m (Ben Rumsby, Daily Telegraph) Fulham were on the brink of being sold by Mohamed Fayed, with the owner of American football team the Jacksonville Jaguars said to be ready to buy them.  Shahid Khan, a billionaire car-parts manufacturer who acquired the Jaguars in 2011, would become the sixth American owner of a Premier League club should the proposed takeover be concluded. The sale, which could be completed by the end of the week pending Premier League approval, should net Fayed in the region of £150 million to £200  million, a similar figure to that he loaned the Cottagers during his 16 years as chairman and benefactor.

Luis Suárez: Brendan Rodgers’ silence speaks louder than words (Paul Wilson, Guardian) Four of Liverpool’s summer signings were doing Melwood media duties for the first time on Wednesday. Luis Alberto, Iago Aspas, Kolo Touré and Simon Mignolet all spoke appreciatively of the warm reception they have received at the club and all four dutifully recorded their delight at joining a side so rich in tradition and history. You know how these things go: they are hardly likely to complain about anything on their first day, are they? Just strike the right tone, say the expected things and get back to training. Everyone expected it but even so all four newcomers were asked how they felt about Luis Suárez, specifically whether the excitable Uruguayan should stay or go. If you want to know how desperate things get in the dog days of the close season, there’s your answer, right there.

Spurs dangle Benteke bait (Paul Jiggins, Sun) Tottenham are ready to give Aston Villa the pick of four stars in part-exchange for Christian Benteke. But they are unwilling to match Villa’s £25million asking price for the wantaway striker. Spurs value him at closer to £20m and hope to pull off an audacious cash-plus-players swoop. They are ready to allow at least one of Benoit Assou-Ekotto, Scott Parker, Jake Livermore and Tom Huddlestone leave as part of the deal.

Rob’s Feu regrets (Phil Thomas, Sun) Roberto Martinez reckons he has landed a gem in Barcelona rookie Gerard Deulofeu. Everton boss Martinez pulled off a coup by landing the Spanish striker, 19, on a season-long loan. The Toffees chief insisted: “Gerard is a real diamond of Spanish football and has incredible talent. “I’m delighted he is taking the next step of his career with Everton. “He has potential to be a real star and the Everton family is the perfect environment for him to progress. “The experience we have will help his development and he will bring a completely different, penetrating approach to our group. “A lot of top clubs around Europe were interested in Gerard, so it is fantastic that he has joined us.”

Blow for BT as Sky kick-start ratings war by snapping up Man United and Chelsea’s opening clashes… leaving new boys with scraps of Liverpool v Stoke (Charles Sale, Daily Mail) The TV fixtures announced on Thursday will kick-start the war between Sky Sports and BT Sport for Premier League supremacy. And Sky’s first picks mean a low-key start for newcomers BT with Liverpool v Stoke due to be their opening Saturday match. Sky cover Swansea v Manchester United and Chelsea v Hull that weekend.  All eyes will be trained on the first game of the Premier League champions’ title defence, with David Moyes taking charge of a league match for the first time.