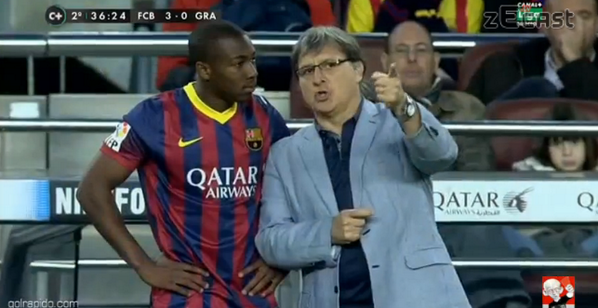 At 17 years and 10 months, Adama Traore became the 8th youngest player to debut for Barcelona in La Liga on Saturday in the home drumming of Granada.

Traore was brought off the bench for Brazilian starlet Neymar with eight minutes remaining.

Traore’s rise to the first team at Barcelona is a story which films are made from. The son of immigrant parents from Mali, Traore was born in Hospitalet before he joined Barcelona’s youth setup in 2004, aged 8.

Adama Traore’s father works as a mechanic in Barcelona, while his mom is a maid.

Traore’s promotion into the Barcelona first team has been rapid, considering the teenager has only played a handful of games for the B-team this season.

Watch footage of Adama Traore receiving his Barcelona debut v Granada below, along with video evidence of Barca’s latest young star you should know about.