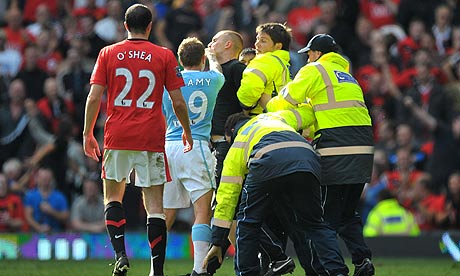 Sunday’s Manchester derby was an awesome occasion that culminated in Michael Owen’s 96th minute winner that sent Old Trafford bananas. Yet away from the specific footballing matters, two off the field incidents grab the headlines this Monday as Craig Bellamy landed himself in hot water by confronting a pitch invader while Javier Garrido was hit in the face with a missile from the stands.

After contributing with a superb double, Craig Bellamy let himself down at the end of the derby by getting unnecessarily involved in an altercation with a Manchester United fan who invaded the pitch to celebrate Owen’s winner. The Wales striker appeared to shove the United supporter after police had already grabbed hold of the errant fan and questions will undoubtedly be asked as to why Bellamy felt the need to get involved.

In a second controversial incident, City’s substitute defender Javier Garrido was struck by a missile thrown from the crowd at Old Trafford. This occurred as the City players headed past the United supporters at the Stretford End on their way down the tunnel at halftime.

The Bellamy-fan confrontation and the Garrido missile, presumably aimed at Carlos Tevez,Â can both be seen here.