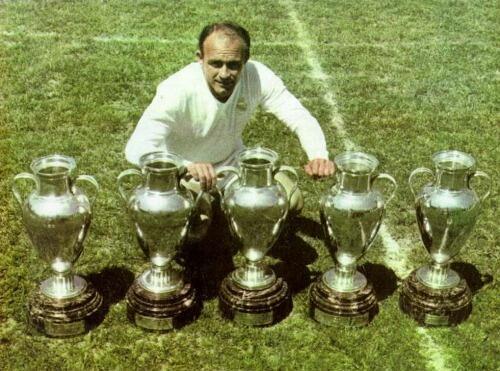 Sad news broke out of Spain on Monday afternoon: Alfredo di Stefano has passed away.

Reports came out over the weekend that, just days after his 88th birthday, Real Madrid legend Di Stefano has been put into a coma after suffering a heart attack.

According to Marca, Di Stefano had a cardiac arrest on the street at 5pm on Saturday afternoon.

The honorary president of Real Madrid was subsequently being treated for at the Gregorio Marañón hospital, however on Monday he passed away.

Below are the best tweets and tribute to Alfredo di Stefano.

Alfredo Di Stefano is the only footballer to ever score in five consecutive European Cup finals. A sporting legend

We're sad to hear @RealMadrid legend Alfredo Di Stefano has passed away. The thoughts of everybody at #mufc are with his family & the club.

It'll be an emotional #ARG on Weds after the great Alfredo di Stefano passed away. RIP to a football legend pic.twitter.com/x3z9OoOuD8

Alfredo Di Stefano has died. One of the greatest players ever. Scored in 5 successive European Cup finals. A feat never to be matched. #RIP

The angels will be giving Alfredo Di Stefano a guard of honour. He won RM 1st European Cup & lived to see the 10th. Honour to have met him.

After the Munich Disaster, Santiago Bernabeu spoke to Di Stefano about loaning him to United until the end of the season as a good will…

One of the greatest to ever grace a football pitch, Alfredo di Stefano has sadly passed away!! https://t.co/j1R6IHWgYb