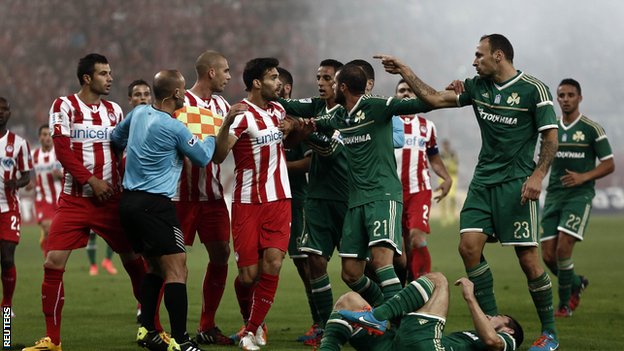 It’s the match of the season in Greece on Sunday as league leaders Olympiakos travel to second placed Panathinaikos in a game that could well determine the title.

Bet365 are showing Panathinaikos v Olympiakos live, legal and straight onto your computer via 101 Great Goals.

Panathinaikos v Olympiakos is available everywhere in the world, except for Greece, Canada and Australia.

NOTE: Please be aware that you will need an active Bet365 account to watch the match.

If Panathinaikos have any hopes of winning the title, they need to close the current six-point gap on leaders Olympiakos this weekend on home soil.

This weekend could also be the perfect opportunity for Pana to win, as Olympiakos come into the match having lost 2-0 away at Dnipro in the Europa League on Thursday, while the hosts have won their last four games on the bounce.

When the two sides met in the reverse fixture earlier this year, Olympiakos beat Panathinaikos by a narrow 1-0 margin.