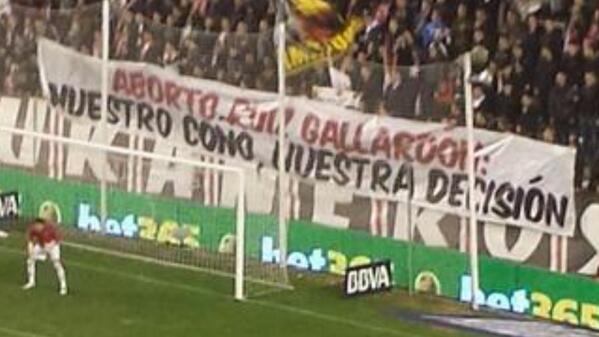 Rayo Vallecano’s Bukaneros are widely ragarded as the most radical, free-thinking Ultras group in Spain, with a sizeable female membership to boot.

Los Bukaneros are famed for using their voice for important concerns beyond the realm of football, from the social to the political.

And they used their La Liga return agasint Villareal at their home Vallecas to voice Spain’s latest social controversy – a proposed abortion law from Minister for Justice Ruiz Gallardón.

Without getting bogged down in its complexities, Rayo’s female Ultras are against it, and voiced their disagreement with an excellent banner behind the goal:

You can’t really argue with that.

Get a free bet worth up to £25 when you place your first bet with VBET!
Visit VBET!
Click here for more Premier League betting tips
Share with FacebookTweet on TwitterSend EmailCopy to Clipboard
101 Great Goals brings you its best offers and content on live streaming and sporting events. If you use our links we may earn a commission and all of our reviewers are compensated for contributing content to 101 Great Goals.