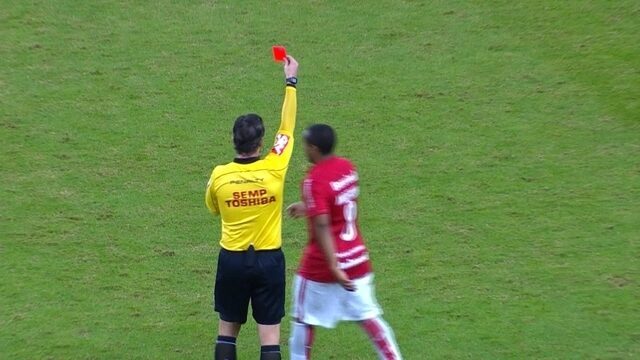 It was another rough weekend for former Manchester United midfielder Anderson.

Anderson left Manchester United to join Internacional in the January transfer window, and so far the midfielder has struggled to shine for his new employers.

The writing was probably on the wall ever since Anderson made his debut for his new employers back at the start of the year.

In his debut for Internacional against Cruzeiro, the 26-year-old marked that occasion by coming on as a substitute in the second half, only to miss a penalty in the 74th minute.

Anderson followed up that ‘dream debut’ with a difficult night in the Copa Libertadores back in February when, in a match away at Bolivian side The Strongest, the tubby midfielder was given the hook after only 36 minutes of the match.

On that occasion, Anderson suffered from La Paz’s famed altitude sickness, as the city stands at over 3500m above sea level.

Fast forwarding to more recent times, and Anderson was back in action on Sunday night as Internacional slumped to a 3-1 home defeat to Atletico MG in the Brazilian top flight.

Anderson lasted just 61 minutes of the match before he was sent off for running his mouth at the officials (watch the footage here).

Anderson displayed some terrific facial expressions as he received his marching orders. See those pictures below.