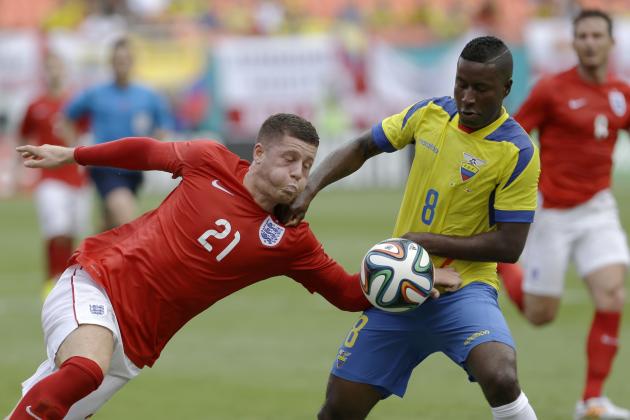 Alex Oxlade-Chamberlain and Jack Wilshere will miss the match due to injuries. Raheem Sterling has been suspended after his red card in the game against Ecuador.

Following a comfortable 3:0 victory over Peru, Roy Hodgson’s men were held to a 2:2 against Ecuador last week, with Wayne Rooney and Rickie Lambert scoring for the Three Lions.

Hodgson is expected to field his strongest team for England’s ultimate test on Saturday, with the exception of Wayne Rooney, who may be given a rest after having played the first two fixtures. Raheem Sterling will also be unavailable following his red card against Ecuador, as a consequence for a rough tackle against Premier League colleague Antonio Valencia.

The match against Ecuador showed great promise from two of England’s bright young stars, Alex-Oxlade Chamberlain, and Ross Barkley. The former is guaranteed a starting berth after his performance last week, but is still recovering from an injury, and Hodgson is awaiting a decision from the medical staff regarding the fitness of the Arsenal winger.

Should Barkely repeat his stellar display against Ecuador, he will be a serious contender for a starting berth in the group stage in Brazil.

Honduras have never faced England previously, and is considered one of the weaker members of the World Cup finals, having picked up only two clean sheets in 10 qualifying matches and scored just 13 goals – one more than the number they conceded.

The Three Lions will look for a clear win against Luis Fernando Suarez’s men, in order to arrive in Brazil with confidence, something Roy Hodgson’s men will need desperately in their first group stage match one week from Saturday, when they face Italy.

Some essential facts and stats to help with online betting:

This is the first time these two teams will meet.

The Honduran roster consists of a few Premier League players but the most notable is Hull City defender Maynor Figueroa. The former Wigan player’s amazing goal from his own half against Stoke at the Britannia Stadium was voted as Goal of the Season four years ago.

Honduras manager Luis Fernando Suarez is no stranger to the World Cup as he guided Ecuador to the Round of 16 eight years ago. La Tri got eliminated by England thanks to a David Beckham free kick.

The Three Lions are obviously on better form than their opposition as they picked up one win and one draw in their last two warm-up matches. Honduras have lost both games to Turkey and Israel.

Wayne Rooney has yet to score a goal in the World Cup finals.