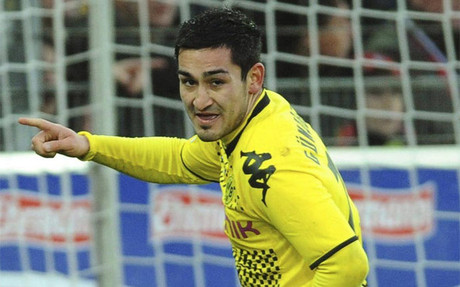 Catalan paper Sport report this Thursday morning that Barcelona have already begun looking for replacements for Thiago Alcantara with the Spain Under-21 star seemingly set for a transfer to Manchester United.

Long rumoured in recent weeks, Thiago can leave the Nou Camp for 18 million euros (plus VAT) due to a release clause and there have been suggestions from ESPN that the Barcelona midfielder could be unveiled at Manchester United on Friday.

Despite denials from Barcelona, Sport claim the Catalans are resigned to losing Thiago Alcantara in the coming days and have already targeted Borussia Dortmund playmaker Ilkay Gundogan.

Although there is a small chance Thiago Alcantara could change his mind, Barcelona’s choice is whether to move for Gundogan from the Chamoions League finalists or trust in Sergi Roberto to step up from the B side.

It had been thought that Sergi Roberto would be trusted in a squad role, but Barcelona have tracked Gundogan for some time and believe the Dortmund schemer won’t be out of their price range.

Crucially, from a Manchester United perspective, Tito Vilanova has held talks with Thiago Alcantara but failed to convince him to stay. The midfielder is convinced he can make more progress towards the Spain World Cup squad, at Old Trafford.

Finally, Sport add that Gundogan is first on their list of replacements for Thiago with Barcelona believing a deal is possible.